My Two Favourite Inventions of the 19th Century – Railway and Photography

What you'll find in this blog post:
1) My Two Favourite Inventions of the 19th Century – Railway and Photography
1.1) Two inventions that have changed the world and its perception – and for which I am grateful every day. Come with me on a little excursion into the history of technology!
1.2) What Victor Hugo has to do with railway history
1.3) Of iron steeds and magic boxes
1.4) The wonders of their time become everyday life
1.5) Faster times
1.6) When images started moving

My Two Favourite Inventions of the 19th Century – Railway and Photography

Two inventions that have changed the world and its perception – and for which I am grateful every day. Come with me on a little excursion into the history of technology! 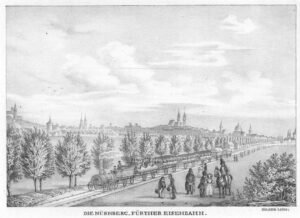 The Nuremberg-Fürth railway line was the first in Germany and opened in 1835. This lithograph from 1839 shows the steam locomotive as well as the open railway carriages that were common at the time.

The two main ingredients of my art, trains and cameras, have become indispensable in our everyday lives. Every city and most smaller towns can be reached by train, and even if hardly anyone carries a ” photocamera” with them, photography has become ubiquitous, and not just since the triumph of smartphones.

Can you imagine what it was like when the first railways ran across the countryside? How fascinating this new transport technology must have been for the people of the 19th century, and how breathtaking and perhaps also terrifying the speeds?

What Victor Hugo has to do with railway history

Incidentally, my enthusiasm for railway history was directly triggered by my love of motion blur. After I started photographing landscapes in motion during my studies, I came across the book “The History of Blur”. In it, I found a quote that expresses exactly what I was capturing on camera: In 1837, the great French poet Victor Hugo boarded a train for the first time. He was so fascinated by the speed and how it changes perception that he recorded his experience in a letter to his daughter Adele:

“The flowers along the field are no longer flowers but spots of colour, or rather red or white stripes; there is no longer a dot, everything becomes stripes; the fields of grain become long yellow strands, the fields of clover appear like long green braids; the towns, the church towers and the trees perform a dance and mix with the horizon in a crazy way…”*

I definitely wanted to use this quote in the text part of my thesis, and was curious to see what else Hugo had written. The author of my book on the history of blur had taken this quote from the “History of Railway Travel”, and I had a new book on my reading list. Aside from being disappointed that there was no other source citation for the Victor Hugo quote, I was just thrilled. Until then, I had never thought about what an incredible impact the invention of the railway had had on society! And besides getting an insight into the history of technology, I also got a better idea of this exciting time, which coincided with the invention of photography.

Of iron steeds and magic boxes 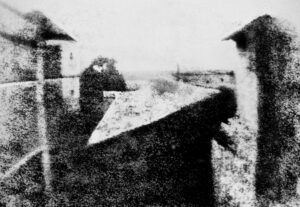 The world’s first photograph preserved to this day, the view from the study of Joseph Nicéphore Niépce – 1826

While the steam engine revolutionised industrial production and transport, research was also carried out into various processes using light-sensitive materials, thus laying the foundations for photography. At that time, painters were already using the optical principles of the “camera obscura” to project lifelike images onto paper, but these then had to be traced by hand. Suddenly, however, there was an almost magical process that took place inside of huge cameras and darkrooms and was able to capture reality exactly. Even though these two inventions had little to do with each other, they took place almost simultaneously:

In 1825, passengers were carried by a steam-powered locomotive for the first time ever on the railway line between Stockton and Darlington in England.
In 1826, Joseph Nicéphore Niépce successfully captured the view from his study on a coated asphalt plate. This view from the window is considered the oldest photograph in the world preserved to this day. The exposure of this so-called “heliograph” took about 8 hours, but it showed that it was possible to fix light images permanently. Niépce began a lively exchange of letters with the painter Louis Daguerre about his findings. He died in 1833, a few years before the official presentation of a commercially viable photographic process.

While Niépce and Daguerre refined the daguerrotype in France and Talbot laid the foundations for the negative-positive process in England, the first railway lines were built in North America and continental Europe. The first line in Germany (Nuremberg-Fürth) was opened in 1835.

The wonders of their time become everyday life 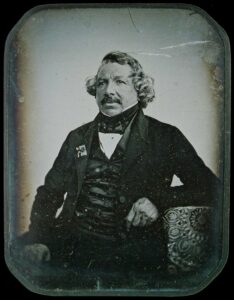 A daguerreotype of Louis Daguerre, taken by Jean-Baptiste Sabatier-Blot in 1844

I can only assume that the line that inspired Victor Hugo’s poetic description was the Paris – Le Pecq passenger line, opened in 1837. Within a few years, the railway had gone from being a fearfully regarded innovation to a part of every day life. The railway age had begun.

Two years after Victor Hugo had discovered that all dots turned into stripes, Louis Daguerre presented his daguerrotype in Paris; a process with which images could be captured in the finest detail on light-sensitive metal plates. He made this technique freely available, so that it was able to spread worldwide within a very short time. Therefore, this presentation is considered the birth of photography. Since in the beginning it was still necessary to expose for up to 15 minutes, no moving objects or people could be photographed. Within a few years, however, the technology had advanced so far that focussed portraits were made possible. 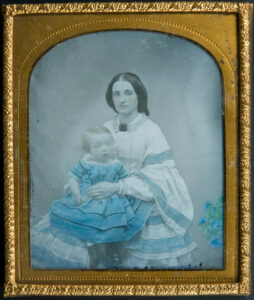 This ambrotype dates from about 1860 and was coloured by hand. The mother is in focus, the child seems to have moved during the photograph.

So it was not only the railways that became faster and faster, but also photography. Because the more light-sensitive the materials could be produced, the less one had to deal with an unpopular phenomenon, motion blur. What was considered an image defect back then is now my favourite stylistic device…

I learned a lot about the history of photography during my studies (and forgot a lot again). In the uniformity of today’s digital photography, one can hardly imagine how many different processes, materials and approaches there were to capture images of nature. Daguerrotype was followed by abrotype, another direct-positive process; William Henry Fox Talbot developed paper negatives; the collodion wet process was the first time glass plates were used; and when the gelatine silver process was invented, photographic material could be prepared and distributed on a large scale for the first time.

And this is where the Lumière brothers come in: in the 1880s, they developed much more sensitive plates than other suppliers and built up a small empire with them: in 1894, the Lumière brothers produced about 15 million photographic plates and employed 300 workers. They also worked on moving images and developed cinematography.

There is a wonderful anecdote for which, unfortunately, I could not find any historical evidence. The Lumière brothers are said to have filmed a train travelling directly towards the camera. This short film was allegedly one of the first (or the first) film in their screening in the 1890s. The audience, who had never seen moving pictures before, is said to have left the screening in panic. As I said, unfortunately this cannot be confirmed, but I have found a film by the brothers from 1897, which was certainly equally impressive for contemporaries.

First photograph, the view from the study of Joseph Nicéphore Niépce https://de.wikipedia.org/wiki/Joseph_Nic%C3%A9phore_Ni%C3%A9pce#/media/Datei:Point_de_vue_du_Gras_by_Ni%C3%A9pce,_1826.jpg